No, this isn’t a wildlife print by John James Audubon. It’s just a bird that I drew this morning on my smartphone. 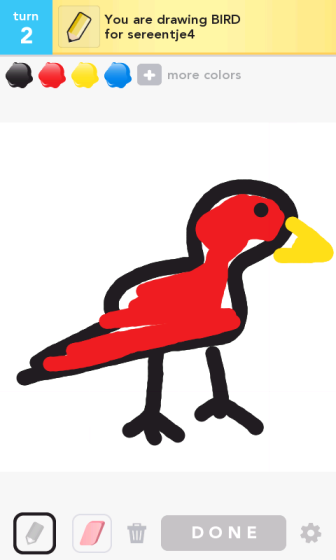 If you guys haven’t downloaded Draw Something yet, get on it. First of all, this brilliantly simple turn-based pictionary game will provide you with hours and hours of fun (outside of class, of course). Secondly, there are a number of elements contributing to this game’s success worth noting. And third, I want some more people to play with. (As you can see by my screenshot, I am playing with a random user because my 4 friends who play are taking too long in between turns.)

Draw Something was downloaded over a million times in the first 10 days it was released. As of now, the game is seeing 10 million new drawings every 24 hours. That is a lot of action.

This explosion of growth was made possible because Draw Something was released as a truly cross-platform app. Players can connect with friends via Facebook or Twitter, as well as invite people to play by email. Android and iOS phone/tablet users can play against one another. Also, Instagram has proven to be a surprise marketing engine because Draw users like to post screenshots of their pictures. (It is also worth noting that you are not required to connect with a social network to use the app, if agreeing to the Facebook permissions creeps you out) Because the game made a simultaneous splash on both major mobile platforms with options to connect with the two largest social networks, there was never any friction in the word-of-mouth machine. Some applications lose momentum when they roll out for the iphone and Android users must sit on their hands for another couple months while their version is in development, or vice versa.

The developers, OMGPOP, were smart to incorporate a variety of ways to monetize this app. The free version cashes in on banner advertising. Presumably these ads will have a much higher click-through-rate because they will leverage information collected from the user’s social network. Players can also buy virtual goods such as new colors, effects, and bombs for simplifying turns. This ability to collect additional revenue should allow the game to stay profitable longer by adding value for hardcore gamers without turning off more causal users. Interestingly, CEO Dan Porter reports that the largest source of revenue is upgrading to the $0.99 version of the game. The premium version is ad-free, with additional words, and a few extra gold coins to get you started. Overall, it is not all that different from Draw Free. In the end, it seems that the game is so addicting that users don’t think twice about shelling out the for the dollar upgrade. Right now, Draw Something is seeing 5-digit daily revenue.

Draw Something’s success is not unique. A post this week on the Facebook Developer’s blog highlights the success of casual arcade-style gaming. This is one of the oldest app categories on Facebook and continues to be a leader in growth. These games are especially beneficial to Facebook because of their high engagement factor. Users keep logging on to play, boosting page-views and subsequently increasing opportunities for users to see new advertising. In an effort to encourage developers to build upon these games’ success, Facebook points out a few strategies for success:

Good game mechanics are proving to be an essential quality for an app’s success, and Facebook is continually doing everything it can to create opportunities for developers to drive discovery and re-engament. Digging a little deeper into your favorite time-waster may reveal some great ideas for how companies can use applications to connect and stay connected with their most valuable constituents.