I feel as though this topic has been thoroughly covered by others here, but I was also assigned the topic so bare with me as I provide yet another explanation of why there are big differences in privacy between the United States and Europe. I’m also throwing in China and other potential global economic powers in the mix.

If you think about the political mentalities in both Europe and the United States, there is a definite difference.  As is common in political rhetoric these days, American culture is generally more accepting of the idea that companies can regulate themselves and be responsible.  Not so in Europe.  This article published recently in the Economist provides ample explanation and context for the issue at hand.  A big part of the difference, says the author, is history.

A Eurobarometer poll last year found that 62% of Europeans do not trust internet companies to protect their personal information. A big reason is history. In the 1930s Dutch officials compiled an impressive national registry. This later enabled the Nazis to identify 73% of Dutch Jews, compared with just 25% in less efficient France, notes Viktor Mayer-Schönberger of Oxford University in his book “Delete: The Virtue of Forgetting in the Digital Age”.

Even though the United States is proposing new privacy legislation in regards to the data, the political climate, especially given that it’s an election year, make the chances of the bill passing very slim.  All the while, incompatibility between the E.U. and U.S. laws could hinder company’s abilities for interoperability.

Right now, there are obvious differences in the laws.

The ability to provide data protection laws and encourage interoperability may well be the basis of innovations of the future and without ample laws, that innovation could be hindered.  On the other hand, just talking about privacy laws in the U.S. and the E.U. is a moot point if one does not consider the other major players in the global economy, writes the author of the economist piece.

America and Europe will set the global standards. But other countries’ privacy rules matter too. China and India will soon have more people online than Europe and America have citizens. Neither Asian country has yet passed formal national legislation, but both are considering it—with every indication that their new laws will outdo even Europe in their severity.

This week I had the pleasure of viewing this video and then the sequel.  Talk about a world of innovative technology!  It made me wonder what environment would better encourage innovation while also protecting consumer data at a reasonable data.  I still haven’t made up my mind as to whether the EU policy goes too far, but one things for sure, some greater amount of consumer data protection legislation or company policies regarding consumer data protection are needed in the United States if this is what our future will look like.  There’s just too much sensitive data out there–on everything from major health scans and test results and credit card history information to menial data such as a lifetime of Facebook data–that could lead to systematic discrimination.

Where is the line? How far is Facebook allowed to go before its users decide enough is enough? It’s no doubt that age has its place with how users are concerned with their data being collected and saved. The younger generations of users has grown up in the data driven environment and are willing to sell their information, likes and interests for constant communication with ones friends. At what point do the users decide how their information is being used or collected as creepy? This is very important for the social media outlets to discover, because its necessary to determine at what point is it TOO much.

According to an Ad Age article, Facebook made up 52% of sharing in 2011. In fact, the new Facebook Timeline feature (which will be mandatory for the millions of users) will issue information more publicly to allow users to share their information easier, according to a Fox News article by John Quain. Quain even makes the point that “so if it’s illegal for the government to secretly track you, consumers should ask themselves, why isn’t illegal for businesses to do it?“ How convenient and nice of Facebook!

The Take This Lollipop video provides a creepy, fictional account that strikes fear in many who can see the negative aspects of social media. However, it’s these type of fictional portrayal of “social media gone wrong” can turn off the older crowd of users deeming social media as too public or creepy.

Located within the Facebook Privacy Policy is all the necessary information to realize what Facebook does with users data. This puts users at a decision point. Should users continue to allow the creepy activity of taking their information and posts, but continue to utilize the social connection with their friends or risk leaving the social network. Older generations fearing what COULD happen with their information being leaked are more likely to dump the account out.

While Facebook is working to continue to utilize the information posted by its users, it will also monitor how to stay just close enough to the “creep” line and collecting the information of its users, but not too close to drive the traffic away. This line is most important in determine how to keep the interest and “trust” of the younger generations of users. Sure, they might lose some older generation users, but they are not the future. It’s most important to keep in good relations with the younger generation users.

A study by Goldfarb and Tucker, According to Technology, Age and Privacy Concerns, shows patterns of how age is tied in with privacy concerns. This study took  over 3 million surveys conducted by a market research group over an 8 year period to develop their findings. Goldfarb and Tucker found that people refusing to reveal private information online has risen over time and that older individuals are less likely to reveal information than younger generations out of privacy concerns.

A Nielsen blog post shows the relation between phone application use and the concern of privacy by age. 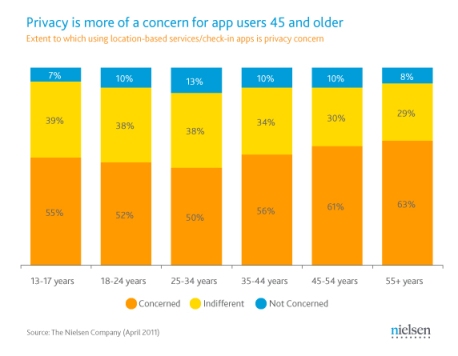 An article in The Joplin Globe, Consumer Confidential: Facebook shows how privacy is passe, shows how privacy issues are divided amongst the generations. The younger generations “…can’t get enough social-media sauce on their cyber-sandwich. They view this technology not as an intrusion but as a life enhancement”. While the older generations, 30 and older, are more likely to pay close attention to privacy settings and what is put out into the open. This article shows the generational divide of how Facebook users react to the “creep” factor and bolster up the privacy settings.

“the information being transmitted is one of Facebook’s basic building blocks: the unique “Facebook ID” number assigned to every user on the site. Since a Facebook user ID is a public part of any Facebook profile, anyone can use an ID number to look up a person’s name, using a standard Web browser, even if that person has set all of his or her Facebook information to be private. For other users, the Facebook ID reveals information they have set to share with “everyone,” including age, residence, occupation and photos.” The full details of the Facebook Privacy Policy is shown below.

So, with facebook’s new privacy policies, timeline features and amount of information ALWAYS made public, how does this fit in with the creep factor? Knowing your information is out on the web, does this creep you out? Surely, not enough to actually deactivate your account. Right?